9 World Cup Anthems: the hits, the misses and the own goals

As the 2018 FIFA World Cup rolled around, I had a story published about two of my great loves; music and football. 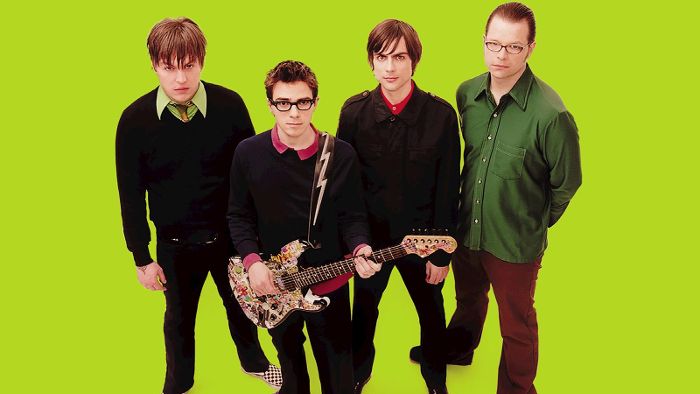 The upcoming World Cup in Russia isn’t just about the best footballing countries on the planet converging in one spot for a kickabout.

It’s also a chance to reflect on some of the more memorable football anthems that pop up every four years and the strange ways they come to fruition.

Luckily, for every Ricky Martin, Shakira or Pitbull song, bands like New Order and Weezer offer an alternative. And, just like World Cup performances, some are good, some are bad, and others are memorable for either all the right, or all the wrong reasons.

Weezer frontman Rivers Cuomo has made no secret of his love for soccer. He detailed his long, and at times heartbreaking relationship with football in the clip for solo track ‘Lover In The Snow’ and penned the downbeat ‘My Day Is Coming’ when the USA were bundled out of the 2006 World Cup.

But his passion for the beautiful game is bigger than the disappointments, and in a period where Weezer’s output is largely known for quantity over quality, ‘Represent’ was released as USA’s unofficial anthem for their 2010 venture.

Echo and the Bunnymen singer Ian McCulloch is best remembered for offering the world classic tracks like ‘The Killing Moon’ and ‘Nothing Lasts Forever’.

But in a sideways move, and perhaps fuelled by parochialism, the Englishman put together England United, a supergroup few wanted, for the 1998 World Cup. It featured members of Space, Ocean Colour Scene and, naturally, the Spice Girls.

In a twist of fate, England would be bundled out of the tournament by Argentina after Posh Spice’s future husband David Beckham was red carded.

We Are Scientists – ‘Goal! England’

New York rockers We Are Scientists were gripped by World Cup fever when the 2010 tournament rolled around. So much so, they were compelled to write a song about it. Only, rather than cheer on their compatriots, they produced a song for England.

“People ask why we didn’t record a football anthem for America,” the band wrote at the time. “When you want to give your girlfriend a great gift, you give her something you know she wants, not something you want.

“We’ve never been huge football guys, but we’re pretty big England guys, and we know her well enough to know she loves her a football anthem. So, we made her one.”

You’d be forgiven for not knowing Chilean ’60s rock ‘n rollers Los Ramblers, but you wouldn’t be reading this article without them.

With the World Cup heading to Chile in 1962, the local group released, ‘El Rock del Mundial’, a song that translates to ‘The World Cup Rock’, starting the musical trend that continues to this day.

When you think of Manchester, two things will usually come to mind; football and music. During the 1990 World Cup in Italy, these worlds collided thanks to legendary new wavers New Order and their contribution to English football via the official team song, ‘World in Motion’.

It seems an unlikely move for the band, and a far cry from the Joy Division days for members Bernard Sumner, Peter Hook and Stephen Morris. Especially when you realise the song’s most notable contribution comes from then-England striker John Barnes’s slow-paced rap verse.

Freedom of Thought – ‘Green and Gold’

Australia’s 32-year absence from the World Cup ended in 2006. Not wanting to waste any opportunity or time, the hunt for an anthem took place in the most logical way; via a reality TV show.

Song For The Socceroos, ran on World Cup broadcaster SBS

and this was picked as the song to motivate Tim Cahill and the boys. Judging the on-field results, it worked.

There are questions whether this track from England’s James qualifies as a World Cup tune. Rumour has it this reworking of their song ‘Low Low Low’ was earmarked to be England’s World Cup anthem in 1994. Except the English didn’t make it that far.

Strangely enough, the song still appeared on the official soundtrack of the tournament alongside the official anthem – ‘Gloryland’ by Darryl Hall and Sounds of Blackness.

TISM – ‘What Nationality Is Les Murray?’

The upcoming World Cup in Russia will be the first on Australian TV without legendary broadcaster Les Murray, following his passing in 2017.

Murray was the face and voice of football in Australia for three decades, with the commentator’s unique accent a topic of TISM‘s musings on the aptly named, ‘What Nationality Is Les Murray?’.

When TISM’s album Machiavelli and the Four Seasons won an ARIA for best independent release, Murray accepted the award on behalf of the band, before giving a speech in his native Hungarian, and answering the question once and for all.